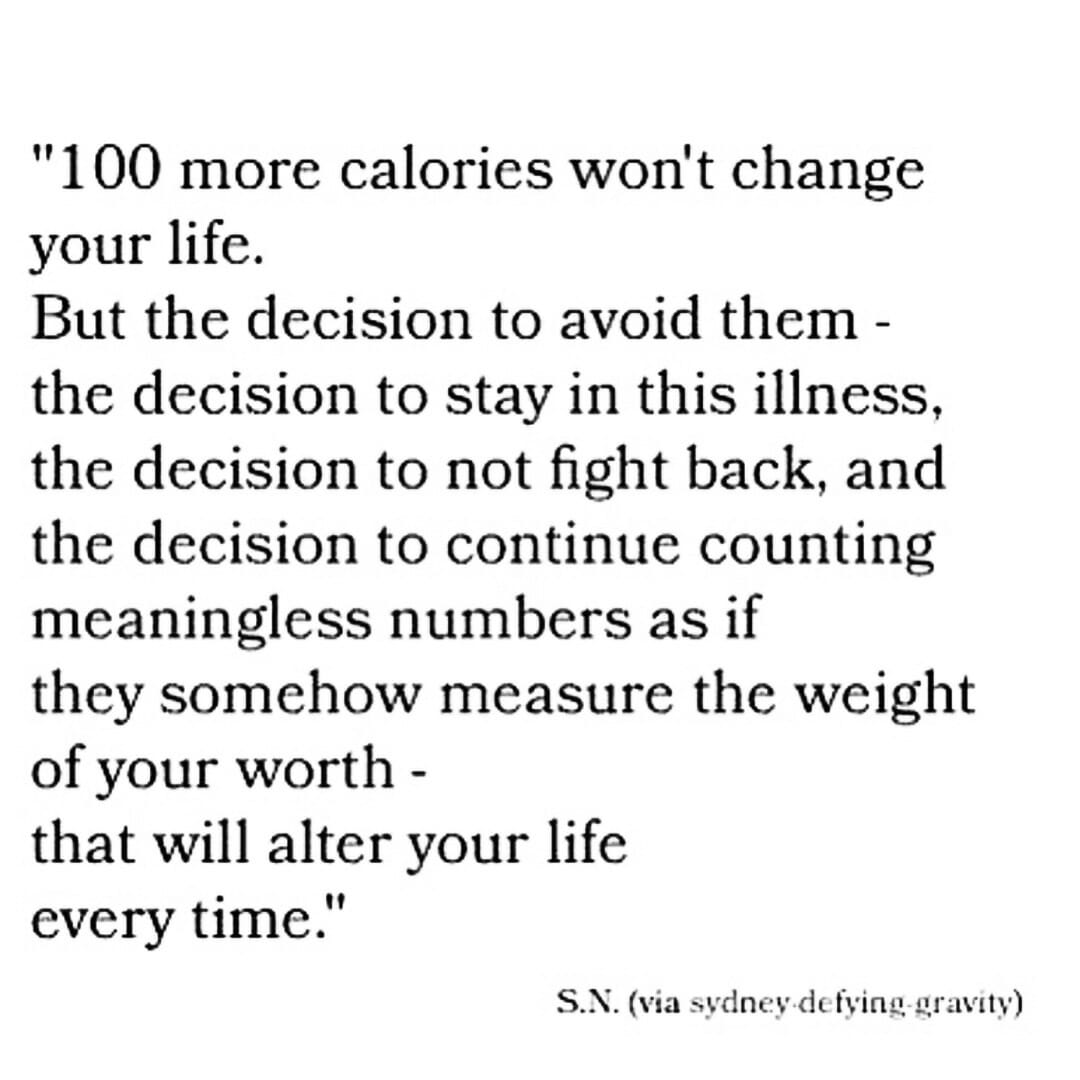 ⋅
💯It’s only 100 calories …
It’s only this one time …
It’s only a few more pounds …
And it’s only a matter of time before avoiding a few calories becomes the difference between life and death.
⋅
I remember when it first started —when I consciously chose to eat less. I remember the time I began counting calories —a game for my OCD.  And I remember when I began losing grip of the perceived control I believed I had.
⋅
I can’t tell you exactly why I started eating less, but I do know it wasn’t a big deal. And really, it wasn’t. It didn’t instantaneously change or impact my life.
⋅
I can’t tell you exactly why I began counting calories, but it did give my restless OCD a job. Memorizing and calculating calories was a welcomed distraction from my deeper problems. But there was nothing dramatic about it.
⋅
I can’t tell you exactly when I realized I had gone too far, but I do know it was somewhere around 100 calories less, a skipped snack twice, a few pounds more, and numerous promises to stop.
⋅
I did not decide or choose to develop an eating disorder.  However, I’ll admit there were many times I did not choose recovery. There were times I deliberately chose not to fight. And there were one too many times I sided with ED. I decided the benefits of staying in my eating disorder still outweighed the consequences.
⋅
At the time, avoiding and eliminating calories didn’t have a noticeable impact on my life. It’s only in hindsight that I can see how those seemingly insignificant decisions collectively led me to a decade-long battle fighting for my life. Eating disorders are insidious and subtly manipulative. The behaviors that initially feel like relief are the same ones that will eventually ruin you.
⋅
The devastating ways an eating disorder can alter your life won’t be apparent until you’re deeply entrenched. It takes a while. Those little decisions to not fight back will add up. The good news is that this also rings true for recovery. The incredible ways recovery can change your life won’t be apparent until you’re committed. It takes a while. And those little decisions to fight back will add up and make a lasting difference. ~Britt💜
Spread the love